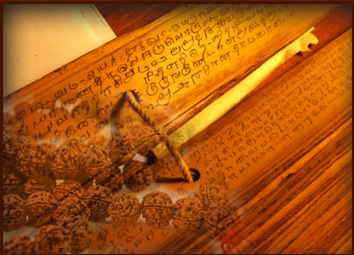 Guru Manirajan is renowned Naadi Astrologer in Mulund Mumbai, has mastered the art of Naadi Reading and interpreting the recording enclosed in Naadi Leaves since a long time. He belongs to a family of Naadi Astrologers since many generations. With substantial experience spanning over decades, he hold decisive expertise in this field.

During this period, people from all paths of life, as well as from various professions, business, status, and creed have been significantly benefited from his predictions.

The practice of Nadi Astrology is different from other Hindu astrology system. As per Nadi Jothidam (Nadi Josiyam) principles, the zodiac is divided in twelve equal sub-divisions of signs with equal subdivisions of the twenty-seven Nakshatras (constellations). Further, these stars are subdivided into unequal sub Lords. Under Nadi Jothidam (Nadi Josiyam) the sub lord is stronger than the Nakshatra and the Nakshatra is stronger than the planet. The sublords form the basis of Nadi Josiyam. Nadi Astrology is based on the belief that the past, present and the future lives of all human beings were foreseen by Hindu sages (Saptarishi) in ancient times and written down as Palm Leaf Manuscripts which are mostly familiar in Vaitheeswaran koil, india.

These plam leafes are catalogues per the signs on the thumb print. For each thumb impression there are likely to be around five to six bundles; each such bundle in turn containing 50 to 100 leaves. The seeker's thumb print is used to approximately locate the closest bundle of leaves. "For Males the Right Hand Thumb

Impression and for Females the Left Thumb Impression is Used".

On obtaining the aspirant thumb impression, it is handed over by the Nadi reader at the library, as it is the scientific fact the whirls and loops of every individual is unique and it is next to impossible to be replicated. The thumb lines are classified into 108 types. The writings in palm leaf bundles are indexed and classified in the library according to thumb impressions to fascinate easy searching of the bundles. One particular leaf might be that of the individual, but the process of finding out that specific leaf is very laborious and time consuming.

To confirm that the right leaf has been found the reader has to read out to the seeker a prediction statement from the first leaf, if the seeker agrees then the reader will read out the second statement to continue verify the exact match of leaf. If the statement does not hold true for the individual, the reader passes on the next leaf, discarding the previous one. This session of confirmatory reading out is conducted until the right leaf is found. It is therefore, evident that the reader will have to go on searching leaf after leaf, bundle after bundle to trace out that one leaf in which all the particulars concerning the individual correctly appear.

To expedite this process, the aspirant seeker has to extend his full cooperation and support because this process may take weeks or months. Once he locates the correct leaf, he begins to read from the leaf, describing the seeker's life in detail. As he read it out in Tamil, there is an interpreter who will interpret it in a language of your choice. Your astrological birth chart details with position of planets, exact names of parents, wife/husband, siblings, education, profession, finance, longevity, and gist of future predictions in a general way is provided. This gist of general prediction is also called General kandam. Similarly, a more intensive prediction about a one of the twelve house (each house is associated with various elements of life) in the horoscope can be provided in under a house specific Kandam. We provide Nadi Jothidam, Nadi Josiyam readings from vaitheeswaran koil,india with great accuracy of preictions and we also provide online nadi jothidam, nadi josiyam predictions